I know I should have written this in February, the day I knew Cosmo shouldn't endure his agony any longer. Or was it me that was in agony? Should anyone make this decision for another warm, living creature? 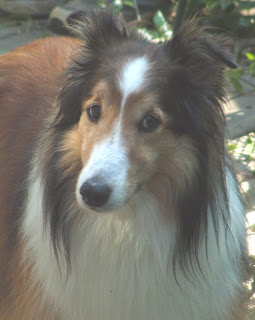 In this case, yes. I hated to see him die, gasping for his last breath. God, it hurts to even think about it and it's been two months ago. I hated to let him go but he was so long overdue to exit this world that I am pretty sure it was a relief for him to let go of his pathetic, fragile body.

Those last few days, Cosmo could barely stand without support, which made it awful for going outside to the bathroom. He's not been able to walk on bare earth for a while now, so he peed on the driveway and we flushed it away with clear water afterwards. But too often, he would lose his balance and sink down into the fresh pee and need a bath. We kept a spongey bathmat in the tub for him so he wouldn't hurt himself on the porcelain.

Oh, I know it was the right thing to do. I miss him. But I don't really miss the old Cosmo. I miss young Cosmo. And I know he did, too. I found some video of him with Kate, our big collie with an even bigger heart of gold. They were playing together, but Kate was getting old and couldn't run very well. It seems my dogs were always off kilter -- one young and rambuctious, one old and willing but unable to play.

Now Sophie and Milli play together with equal vim and vigor. Well, maybe not. Milli is such an athlete and Sophie has spurts of energy, but not sustained enthusiasm. Not sure whether that's because she was a mamma so young or whether it's just her temperament.

Back to Cosmo. I still can't order his headstone yet. It took me several months to bury Boomer's ashes. And when I poured them out of the fancy  brass container, I knew it wasn't him. That's not Boomer, that fine powdery white stuff. Boomer was bold and soft and funny and wild, but never white and powdery.

I am reading Elizabeth Gilbert's book about commitment and marriage. The paragraph I read last night struck me as too true. She remembered a story about her grandfather who took a lantern and carried his wife's ashes out into the November cold to dig her grave. It was hard work, but then it was over. And he went back to the house with only the lantern. Gilbert said that is inevitable for all of us who commit -- one of us will be carrying that lantern for the other one and then it will be over.

That's how I feel about Cosmo. I carried the proverbial lantern for him and our lives together were over. Not in a tragic way, but in a sad, wish-it-was-different way.

I am mourning them both -- all of them, to be honest. The graves were abloom with daffodils last month, now just the leafy green stems remain. But I visit their memorials every so often. I managed to bury Boomer's ashes and place his stone. I can't quite let go of the bed on which he spent his last night. And I can't quite get on the doggie memorial stone site to order a stone for Cosmo.

Soon. It will happen soon. Just not yet.
Posted by Linda Roggli at 8:27 PM